The interview started an hour before the musician began preparing for the night’s jazz show. He seemed to be a little nervous when he heard the interviewer might be late due to the Metro’s delay.

Craig Fee, 34, used to live in a small, beautiful town in England and just arrived in Shenzhen about three months ago. Fee has been living the musician’s life for more than 10 years. He first started a band in high school. “After my graduation, I began teaching guitar in a school in England, but I don’t like the process of ‘climbing up the career,’ I like to be free. I just do the job for money and enjoy my life.” This year, one of his friends, Lucas, who is a drummer and has been in Shenzhen for a while, told him that the city is excellent and he should come. Soon, he packed up the necessary things to move to this city thousands of miles away along with his girlfriend, Megan, who is a singer. “I have nothing pulling me back to England, and I didn’t want to stay there all my life,” he said.

Fee plays guitar at his apartment in Shenzhen. Photos courtesy of the interviewee.

So, the three naturally formed a band. After arriving in Shenzhen, Fee found a job teaching English at a school during the week. However, he is also busy on the weekends. Every Saturday night, the band will give a show at Teacher Coffee in Fanshen, Bao’an District.

“I hadn’t expected that the first city I’d visit in China would be Shenzhen. I’m doing a lot of writing, singing and recording. There is a studio called Voiceland, and it’s great. I recorded the songs and sent them to England to be mixed for my first album,” he said. “As a band [member], I play jazz or soul music, but for me, my music style is like folk music.” Fee mentioned that Megan is also a painter, so she helped create the cover for his album.

Language is one of the differences between doing music in the U.K. and China, he thinks. “When we play on the street, people will stop and watch. It’s good, but for me, I prefer to convert the meaning of my music, so for language reasons, this cannot be realized. I just play and say nothing during the show.” Fee likes to see both himself and the world in the music he writes. “I like people to sing about the way I feel, so it brings me comfort,” he said. 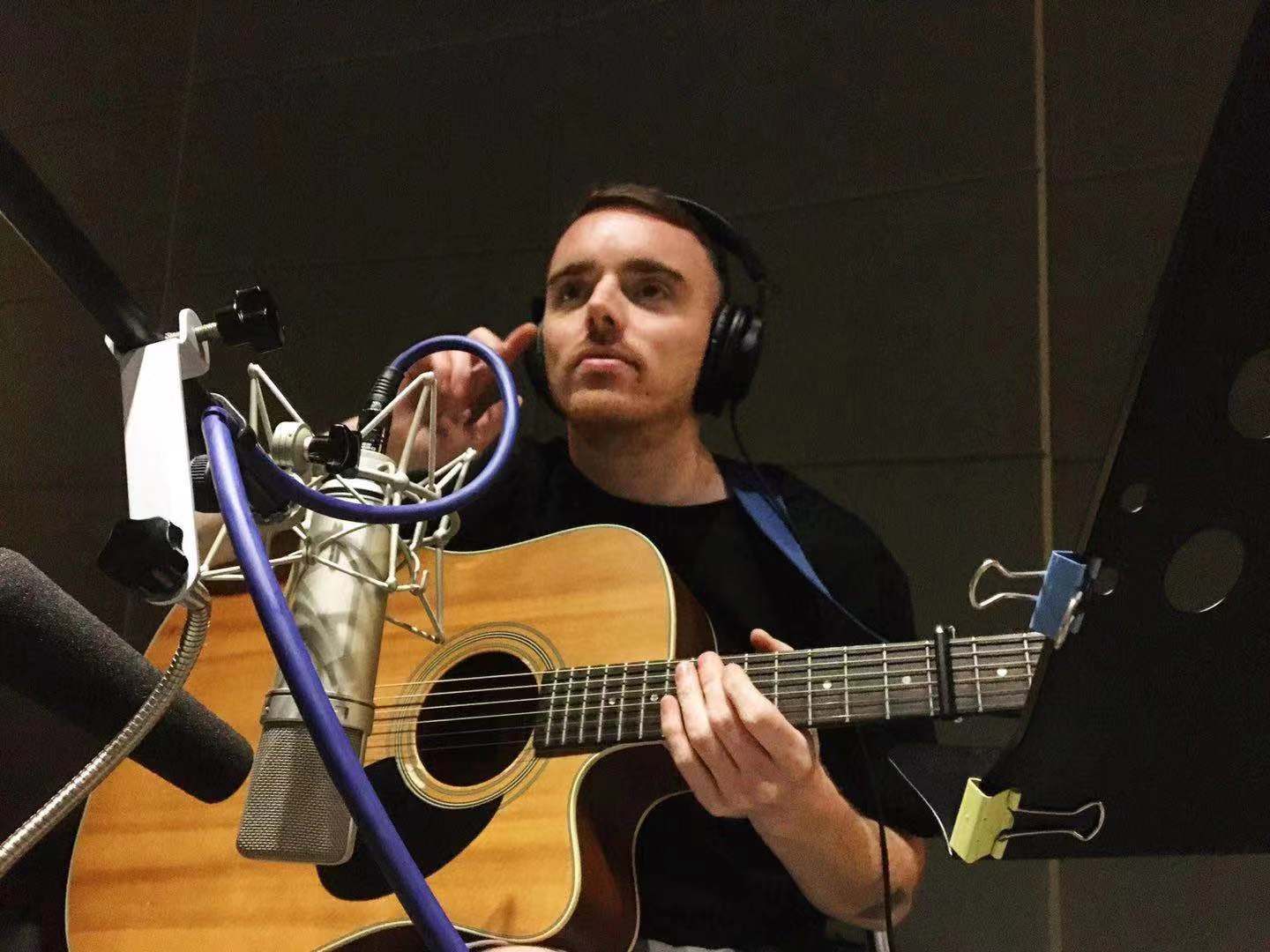 Fee records a song in his studio.

Fee said he also loves cycling, but cycling does not bring him as much joy as music. “My life is about music and traveling, and cycling is a part of traveling. It’s a way to see the world.” He has two separate blogs for recording his life as it relates to music and cycling. He is writing a book about a previous cycling trip through Italy as well as his thoughts on cycling.

As far as his plans for the future is concerned, Fee said that except for the album, he hopes his book can be finished as soon as possible. Secondly, since he only plans to stay in Shenzhen for one year, he will first cycle from Shenzhen to Beijing, and then travel to Southeast Asia and America. “Hopefully we will play along the way and get money to support ourselves. I also want to push my album. I like to challenge myself and never stop thinking and doing things in my life,” the musician concluded.